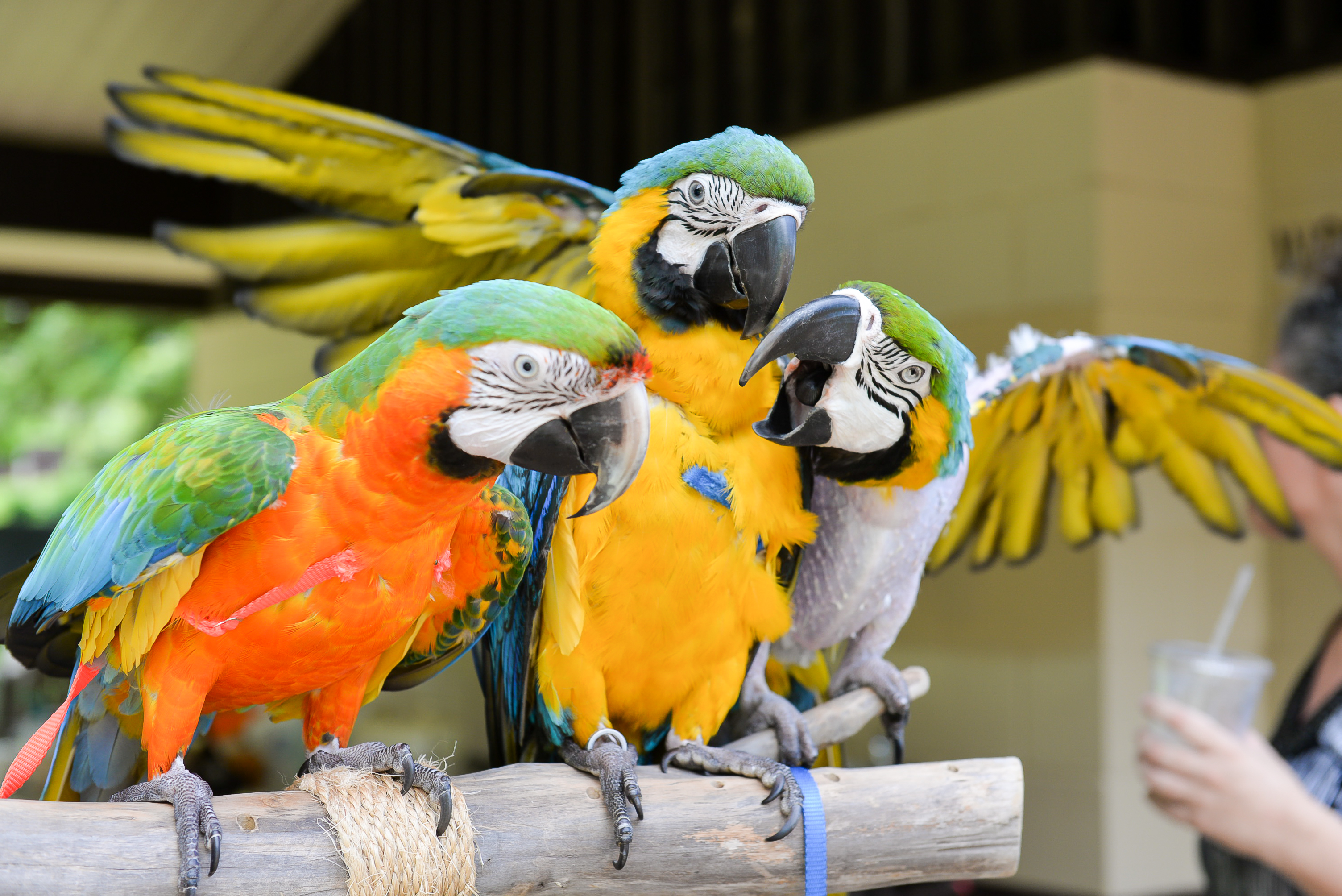 There are several species of parrots in Hawaii.  Although none are indigenous,  there is a whole subculture of enthusiest who flock to the Hawaiian Feathered Friends Network, the highly respected club for parrots in Hawaii.

Parrots, also known as psittacines are birds of the roughly 372 species in 86 genera that make up the order Psittaciformes,found in most tropical and subtropical regions. The order is subdivided into three superfamilies: the Psittacoidea (“true” parrots), the Cacatuoidea (cockatoos), and the Strigopoidea (New Zealand parrots). Parrots have a generally pantropical distribution with several species inhabiting temperate regions in the Southern Hemisphere, as well. The greatest diversity of parrots is in South America and Australasia.

Characteristic features of parrots include a strong, curved bill, an upright stance, strong legs, and clawed zygodactyl feet. Many parrots are vividly coloured, and some are multi-coloured. Most parrots exhibit little or no sexual dimorphism. They form the most variably sized bird order in terms of length.

The most important components of most parrots’ diets are seeds, nuts, fruit, buds, and other plant material. A few species sometimes eat animals and carrion, while the lories and lorikeets are specialised for feeding on floral nectar and soft fruits. Almost all parrots nest in tree hollows (or nest boxes in captivity), and lay white eggs from which hatch altricial (helpless) young.

Parrots, along with ravens, crows, jays, and magpies, are among the most intelligent birds, and the ability of some species to imitate human voices enhances their popularity as pets. Trapping wild parrots for the pet trade, as well as hunting, habitat loss, and competition from invasive species, has diminished wild populations, with parrots being subjected to more exploitation than any other group of birds. Measures taken to conserve the habitats of some high-profile charismatic specieshave also protected many of the less charismatic species living in the same ecosystems.

Many parrots are kept as pets in Hawaii, especially macaws, Amazon parrots, cockatiels, parakeets, and cockatoos. These birds have been popular companions throughout history because they are intelligent, charismatic, colorful, and musical. Some birds can imitate many nonavian sounds, including human speech. The male African gray parrot (Psittacus erithacus) is the most accomplished user of human speech in the animal world; this rain forest-dweller is an uncanny mimic.

Currently the Convention on International Trade in Endangered Species (CITES) bans the sale of any wild-caught species, yet the parrots’ popularity continues to drive illegal trade.

Some parrot species are highly endangered. In other cases, once tame birds have reproduced in the wild and established thriving feral populations in foreign ecosystems. The monk (green) parakeet, for example, now lives in several U.S. states.