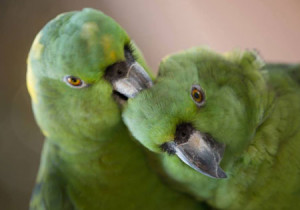 Amazon parrot is the common name for a parrot of the genus Amazona. These are medium-size parrots native to the New World ranging from South America to Mexico and even the Caribbean. Most amazon parrots are mostly green, with accenting colors that depend on the species and can be quite vivid. They feed primarily on seeds, nuts, and fruits, supplemented by leafy matter. Many amazon parrots have a the ability to mimic human speech and other sounds. Partly because of this, they are popular as pets or companion parrots, and a small industry has developed in breeding parrots in captivity for this market. This popularity has led to many parrots being taken from the wild to the extent that some species have become threatened. Treaties have made the capture of wild parrots for the pet trade illegal in an attempt to help protect wild populations. The amazon parrots are about 30 species of parrots. Amazon parrots range in size from medium to large, and have relatively short, rather square tails. They are predominantly green, with accenting colors that are quite vivid in some species. Amazon parrots can be very aggressive at times, so it is important to train them correctly right from the beginning. They need to be taught clear boundaries so they will learn not to bite or scream. Amazons can be fantastic companions. They are caring, loving, and they can become very attached. However, if not properly trained, they can be the most aggressive out of all the parrots.
Natural Habitat
Amazon parrots are from Mexico, South America, as well as parts of the Caribbean. The wild Amazon’s natural habits include savannahs, palm groves, scrub forest and rain forest.
Personality
Amazon parrots typically play hard. An Amazon parrot might swing upside down from the cage, delight in destroying their wooden toys and even wrestle their owner’s hand with their beak. An Amazon parrot’s mood is one of the easiest to read among parrot species because it is excellent at expressing itself through its body language: pinning eyes, raised head/neck feathers, fanned tail feathers and broad stance, for example, indicates a highly excitable Amazon parrot. An Amazon owner should pay close attention to his or her Amazon parrot’s body language to be fully attuned to the bird’s mood. An excitable Amazon parrot might be telling you that it doesn’t wish to be handled, and failure to recognize this might result in a bite. An Amazon parrot can also go into “play overload” during play, especially when beak wrestling with you. Stop the play session to give your Amazon parrot time to calm down as soon as you see overly excited body language. Male Amazon parrots, especially male double-yellow-headed Amazons, yellow-naped Amazons and Blue-fronted Amazons are said to be more aggressive than females of their species.
Speech
Amazon parrots are one of the better talkers of the parrot world. They seem to be especially fond of music and singing. An Amazon could careless if the song it sings is off-key; it will sing as if it wrote the sing itself. Amazons can learn to speak a many words and phrases and imitate sounds. An Amazon parrot can also be noisy, especially when it wants attention. It can scream loudly and some make a repetitive honk-like sound when they want something. Some Amazons make a little shrill sound to express delight while they eat a favorite treat.
Care
Most Amazon parrots love to bathe; and bathing opportunities can include joining their owner in the shower, getting a spray bath, or jumping in their water dish and splashing water all about. Bathing is an important part of an Amazon’s feather health. Because of their love of food and their habit of begging for table foods from their owners, Amazon parrots tend to tip the scales toward being overweight. An Amazon parrot needs a spacious cage with toys and swings spread out, as well as a play gym/play tree, climbing rope and/or ladders to scale to encourage movement and exercise. An Amazon parrot often has a hearty appetite, especially for people food so owners need to make sure that they (and other household members) do not overdue it with treats and table foods. An Amazon parrot’s main diet should consist of a nutritionally balanced manufactured diet, as well as an assortment of healthy vegetables, some fruit and healthy treats that pack nutrition instead of empty calories. Amazon parrots seem to relish the texture of food almost as much as its taste.  A properly cared for Amazon parrot that consumes a healthy, nutritionally balanced diet can live up to 60 years.
Health
Amazon parrots are prone to becoming obese, which is why owners should pay attention to the amount and types of food offered daily. Other diseases/conditions that affect Amazon parrots include: Polyomavirus (can cause anorexia, lethargy, weight loss, death); Chlamydiosis (signs include low appetite, fluffed feathers, nasal discharge) and vitamin-A deficiency if fed an inadequate diet.