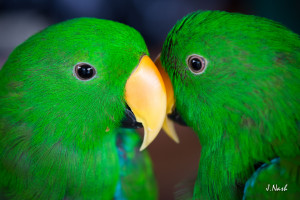 The eclectus parrot (Eclectus roratus) is a parrot native to the Solomon Islands, Sumba, New Guinea and nearby islands, northeastern Australia and the Maluku Islands (Moluccas). It is unusual in the parrot family for its extreme sexual dimorphism of the colours of the plumage; the male having a mostly bright emerald green plumage and the female a mostly bright red and purple/blue plumage.

Joseph Forshaw, in his book Parrots of the World, noted that the first European ornithologists to see eclectus parrots thought they were of two distinct species. Large populations of this parrot remain, and they are sometimes considered pests for eating fruit off trees. Some populations restricted to relatively small islands are comparably rare. Their bright feathers are also used by native tribes people in New Guinea as decorations.

The eclectus parrot is the most sexually dimorphic of all the parrot species. The contrast between the brilliant emerald green plumage of the male and the deep red/purple plumage of the female is so marked that the two birds were, until the early 20th century, considered to be different species. Although the eclectus parrot is the only extant species in the genus Eclectus, fossil remains of another species, Oceanic eclectus parrot (Eclectus infectus), have been found in archaeological sites in the islands of Tonga and Vanuatu. The species presumably existed in Fiji as well. E. infectus had proportionally smaller wings than the eclectus parrot. The species became extinct after the arrival of humans 3000 years ago, presumably due to human-caused factors like habitat loss and other introduced species.

The eclectus parrot is unusual in the parrot family for its marked sexual dimorphism in the colors of the plumage.  A stocky short-tailed parrot, it measures around 35 cm (14 in) in length. The male is mostly bright green with a yellow-tinge on the head. It has blue primaries, and red flanks and underwing coverts. Its tail is edged with a narrow band of creamy yellow, and is dark grey edged with creamy yellow underneath, and the tail feathers are green centrally and more blue as they get towards the edges. The grand eclectus female is mostly bright red with a darker hue on the back and wings. The mantle and underwing coverts darken to a more purple in colour, and the wing is edged with a mauve-blue. The tail is edged with yellowish-orange above, and is more orange tipped with yellow underneath. The upper mandible of the adult male is orange at the base fading to a yellow towards the tip, and the lower mandible is black. The beak of the adult female is all black. Adults have yellow to orange irises and juveniles have dark brown to black irises. The upper mandible of both male and female juveniles are brown at the base fading to yellow towards the biting edges and the tip. Eclectus parrots have a beauty about them that attracts many,


Natural Habitat
Eclectus parrots are native to the Solomon Islands, Indonesia, New Guinea, northeastern Australia and the Moluccas. Their wild diet is comprised mainly of fruits, like as pomegranate and papaya, as well as figs, flowers, leaf buds and some seeds.
Personality
Eclectus parrots are intelligent, gentle birds that become welcome members of the family due to their tranquil nature. They are pretty good with children, though they will not tolerate frantic activity or constant disturbing noise. It will be important to teach children how to behave around the bird, rather than the other way around.

Female Eclectus parrots — even those kept as single pets — have strong nesting instincts and might be inclined to seek out nest sites in dark, enclosed areas around the home, such as in cupboards and underneath furniture. Female Eclectus can be quite territorial, especially during breeding season. If you keep a male and female Eclectus pair, the female will likely be the bossier of the two.

Speech
Eclectus generallyare not prone to excessive noisiness. Eclectus can be quite vocal, and are capable of developing an extensive vocabulary.
Care
Eclectus parrots are very active and need a spacious cage and plenty of out-of-cage time to interact with you. Be sure to buy the largest cage that your home and budget can afford — these birds can become restless and unhappy when confined. Playful by nature, an Eclectus parrot will need a multitude of toys, especially toys designed to be chewed and destroyed, such as those made of soft wood. Be sure that your Eclectus gets plenty of attention and activity. Eclectus can keep themselves busy, but need you to offer the stimulating objects to give them “jobs” to do.

Ecelctus parrots have a longer digestive tract and some aviculturists believe that because of this, they especially need a low-fat, higher-in fiber diet that is not overly fortified with vitamins and minerals to avoid fatty tumors from developing, as well as to prevent vitamin and mineral toxicities. Eclectus parrots generally benefit from more fruit and vegetables (especially those higher in Vitamin A) in their diet, as well as pelleted food. Many Eclectus enthusiasts recommend feeding pellets that are free of artificial colors/dyes.

Health
Eclectus have been known to exhibit episodes of toe-tapping and wing-flipping-type muscle spasms, which is thought to be related to vitamin and mineral imbalances. Talk to your avian veterinarian about the types of foods to feed your Eclectus parrot, as well as which foods to avoid.

Eclectus parrots might be more prone to feather picking (pulling out their feathers) compared to other parrots, which can be tied to medical issues and/or behavior issues. If your Eclectus starts to pick at its feathers, take your bird in to your avian veterinarian for a full medical workup. Eclectus parrots are also susceptible to avian polyomavirus, Hypovitaminosis A and psittacine beak and feather disease (PBFD).