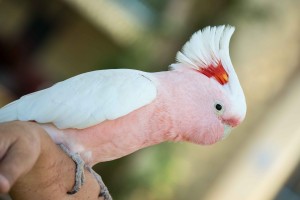 The cockatoo is a parrot that is any of the 21 species belonging to the bird family Cacatuidae, the only family in the superfamily Cacatuoidea. Along with the Psittacoidea (true parrots) and the Strigopoidea (large New Zealand parrots), they make up the order Psittaciformes (parrots).

The family has a mainly Australian distribution, ranging from the Philippines and the eastern Indonesian islands of Wallacea to New Guinea, the Solomon Islands and Australia.

Cockatoos are recognisable by the showy crests and curved bills. Their plumage is generally less colourful than that of other parrots, being mainly white, grey or black and often with coloured features in the crest, cheeks or tail. On average they are larger than other parrots; however, the cockatiel, the smallest cockatoo species, is a small bird.

The phylogenetic position of the cockatiel remains unresolved, other than that it is one of the earliest offshoots of the cockatoo lineage. The remaining species are in two main clades. The five large black coloured cockatoos of the genus Calyptorhynchus form one branch. The second and larger branch is formed by the genus Cacatua, comprising 11 species of white-plumaged cockatoos and four monotypic genera that branched off earlier; namely the pink and white Major Mitchell’s cockatoo, the pink and grey galah, the mainly grey gang-gang cockatoo and the large black-plumaged palm cockatoo.

Cockatoos prefer to eat seeds, tubers, corms, fruit, flowers and insects. They often feed in large flocks, particularly when ground-feeding. Cockatoos are monogamous and nest in tree hollows. Some cockatoo species have been adversely affected by habitat loss, particularly from a shortage of suitable nesting hollows after large mature trees are cleared; conversely, some species have adapted well to human changes and are considered agricultural pests.

Cockatoos are popular birds in aviculture but their needs are difficult to cater for. The cockatiel is the easiest cockatoo species to care for, and is by far the most frequently kept in captivity. White cockatoos are more commonly found in captivity than black cockatoos. Illegal trade in wild-caught birds contributes to the decline of some cockatoo species in the wild.

Natural Habitat
There are 21 species of cockatoos, that belong to the family Cacatuidae. The various cockatoo species have native ranges in Australia, Australasia, Indonesia, the Solomon Islands and New Guinea.
Personality
Cockatoos are often described as intelligent and emotional birds and many describe life with a cockatoo as living with a perpetual 2-year-old child, capable of temper tantrums as well as complete silliness.
Speech
Cockatoos can be extremely loud, especially when seeking attention and at certain times of the day, such as at sunrise and sunset. They can learn to speak a few words and phrases.
Care
A cockatoo needs a well-constructed cage to not only prevent it from escaping but to prevent the bird from destroying it. A pet cockatoo will need a steady supply of appropriate items to chew and destroy.

Cockatoos tend to be needier than other pet parrot species and an owner should set boundaries early on, otherwise the bird might scream for attention. A cockatoo new to the home should not be showered with non-stop attention, but rather given toys and other enrichment opportunities as well as intermittent attention so that the bird learns to keep itself entertained when the people in its life are not able to offer one-on-one time. Food for cockatoos should be nutritious, but should also include a foraging element as well.

Cockatoos are fun-loving, intelligent and energetic parrots, and their food should reflect those traits. Wild cockatoos forage all day for seeds and nuts, as well as coconuts and grain crops. Like all companion parrots, cockatoos do not thrive on birdseed alone. Cockatoo food shouldn’t be boring to eat.

Health
Moluccan cockatoos are prone to picking at or pulling out their feathers is not offered sufficient mental stimulation. Other diseases/conditions found in cockatoos include psittacine beak and feather disease (PBFD), fatty liver disease and obesity if fed a diet too high in fat.